The smart glasses revolution is about to get real 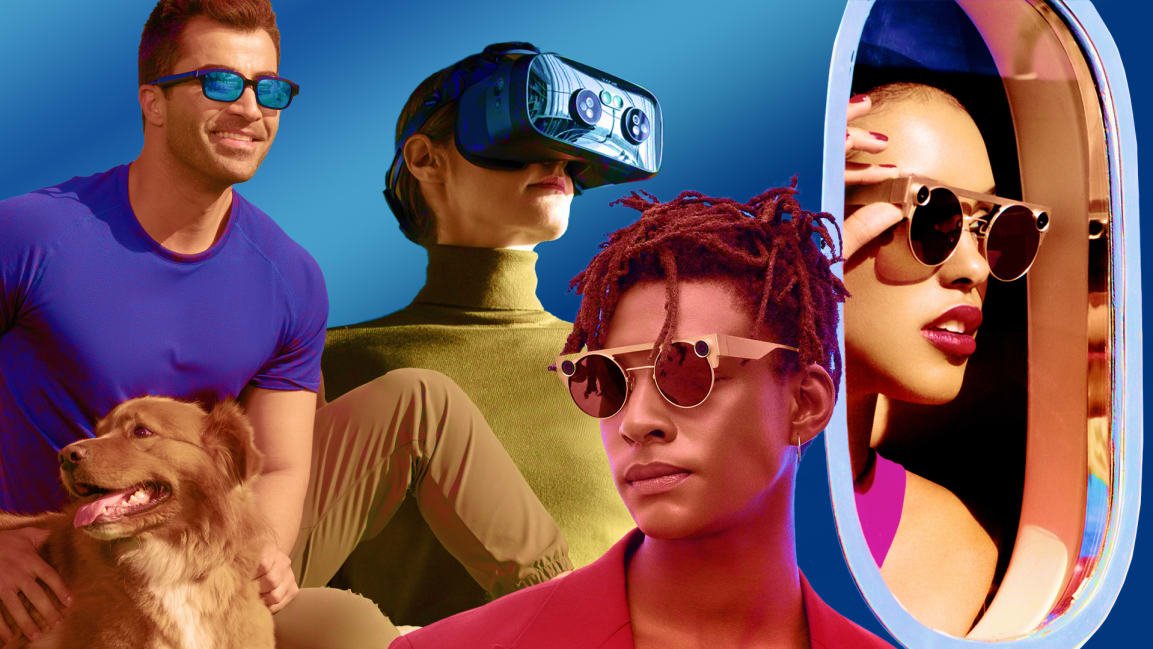 AR eyewear could be the next big thing after the smartphone. And the necessary hardware and software is finally falling into place.

After more than a year in which I’ve striven to maintain an invisible 12-foot dome as I approach other mask-weary faces, I am experiencing a different alternate reality in a nondescript conference room in a hotel a block away from Central Park. At one point, a gigantic robotic arm reaches behind its base to fetch objects that include a medical model of the human body and the International Space Station. Later, a near-life-size concept car fills the room. In both cases, my brain obeys my duped eyes. When the robot swings its payload close to my head, I duck. And when I want to check out the interior of the car, I peer from beyond the door before realizing I can walk through it.

These reflex-inducing illusions are offered up by the Varjo XR-3 (the “XR” is for “extended reality,” a broad industry term to span both VR and digital objects in physical reality). The headset has largely achieved Finnish startup Varjo’s goal of producing virtual worlds and objects rendered at the resolution of human vision.

Breathtaking as digital reality is within the headset, it comes at a price—$5,495 and a mandatory service subscription of $1,495/year. It also comes with literal strings attached—a tether to a beefy PC handling the rendering of these realistic images. And while Varjo has sought to make its latest headset generation as comfortable as possible, Facebook’s consumer-focused VR-only Oculus Quest 2 is smaller and lighter than Varjo’s headset, works independently of a PC, and costs a small fraction of Varjo’s tour de force.

It’s been nearly 15 years since Steve Jobs introduced the iPhone as the convergence of a phone, media player, and portable internet device. The device and those it inspired would launch billion-dollar businesses, transform industries, and change society. Since then, devices such as smartwatches and earbuds—both huge growth categories for Apple—have been incubated as smartphone accessories but groomed to be smartphone successors based on their even greater portability and potential for communicating ambient information. So far, neither has.

And while smart glasses have not even cracked the level of success of AirPods or the Apple Watch, they’re the most likely to ultimately assume the smartphone’s throne. Like earbuds or a smartwatch, they could be a constant presence, even lighter than a smartphone. However, like a smartphone, they can provide a highly visual experience. Most important, smart glasses can overcome the smartphone’s greatest limitation—its limited screen size—and turn the world into not only an infinitely large display, but a contextually relevant one.

Much as the early days of PCs and cell phones offered a range of form factors and capabilities, digital headwear ranges from the industrial headsets exemplified by Varjo to stylish specs without display capabilities, such as Amazon’s Echo Frames. The question for those enabling an extended-reality future is how to exceed the ambition of a high-powered product, such as Varjo’s, in a form factor that matches the commonality of eyeglasses. Industry executives tracking that evolution see the convergence coming within five years.

With its emphasis on power efficiency applied to tasks such as AI for image processing and object detection and 5G for responsively moving around large holograms with imperceptible latency, XR represents a tailor-made market for mobile chip makers, such as Qualcomm, whose chips power the Oculus Quest 2 and Microsoft HoloLens, among other devices. But Hugo Swart, VP & GM of XR at Qualcomm, is particularly keen on one new breed of eyewear that offers extended reality features by offloading most of the processing and connectivity to the phone. One example is Lenovo’s enterprise-focused ThinkReality A3 glasses, which use Lenovo’s Motorola phones to navigate XR applications.

Then there’s the fourth generation of Snap’s curious Spectacles. Its latest version is the first that courts creatives with features beyond image and video capture. While the product’s AR capabilities don’t break much technical ground, Snap is positioning the product toward creators and artists, who have used it for such projects as virtual galleries highlighting artists of color and creating walls of magnetic-poetry-style words that you can walk through.

Content provides another parallel to the smartphone revolution. In the commercial world, VR has been used for tasks, such as training, simulation, and design. HP has even built sensors into the Omnicept edition of its Reverb G2 VR headset to measure a body’s reactions in response to stressful situations that can be trained in VR—for example, trying to land a plane that has had a jet engine blow out.

Just as games helped to popularize early smartphones, they’ve pushed forward both VR, with games such as Beat Saber, and AR, with games like Pokémon Go. Indeed, prior to refocusing on commercial applications, Magic Leap teased a future of massively scaled, augmented reality battles. Given that AT&T was a major investor, it’s not surprising that such a scenario was a dream use case for 5G, one that Niantic is seeking to move forward with its carrier alliance focused on XR.

Social gatherings have been a crossover frontier, with meeting and collaboration apps, such as Spatial and Arthur working across VR, AR, and flat screens. A social experience called Manova is also key to XRSpace, a startup led by former HTC CEO Peter Chou that’s developing a 5G-capable VR headset.

This month, Varjo announced Reality Cloud, which will allow users of its headset to capture their surroundings in highly precise detail and share it as a navigable environment. The announcement comes on the heels of a broad development initiative from nVidia dubbed Omniverse, which allows cloud collaboration among designers with disparate 3D design tools, and uses a system called Cloud XR to stream them to smartphones. In what could become a case of life imitating art, Omniverse is heavily based on Universal Scene Description, a file format and scene description language, developed by computer-animation pioneer Pixar.

SERENDIPITY AT THE FOREFRONT

If the smartphone revolution was defined by access and convenience, the smart glasses revolution promises to be one of experience and serendipity. Varjo Chief Product Officer Urho Konttori says, “With immersive devices getting super small, in a couple of years’ time, you’ll have them in your pocket. You’ll take the device, you put it on your head, and then other people can join the moment. It stops being about geeky entertainment and becomes a more humane form of communication than any other medium before.”

Indeed, Apple’s and Google’s iterative tweaking of smartphone notifications to allow the right balance between things that should grab our attention and those that shouldn’t feels like just a warmup to a world where virtually everything we see might have something useful (or not) to say.

Smart glasses’ final appeal to precedent addresses why people who may have perfect vision would don eyewear. Traditionally, that’s been a geeky affectation. But as smart-glasses form factors become more Tom Ford and less Geordi La Forge, wearing them may feel no less unlikely than past longshot trends, such as people stuffing 6-inch rectangles in their pockets, wearing flashing squares of colorful light on their wrists, and walking around with little white antennae pointing down from their ears.