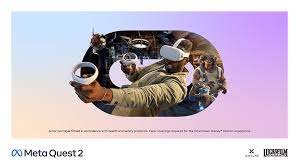 Meta is moving forward with the rebranding of the Oculus Quest 2 as the Meta Quest 2 a week after its Connect conference. Facebook CEO Mark Zuckerberg announced last week that Meta is the new corporate name for the company. Almost all the company's individual services, such as What's app, Instagram, and even the Facebook social network itself, will keep their original titles. Immediately following the keynote, Meta's Andrew Bosworth revealed the Oculus brand for VR products and services would be replaced with Meta brand. The Oculus Quest app will be replaced by Meta Quest's app "over time," according to Bosworth's statement. A new blog post on the Oculus website features the Meta Quest 2 logo prominently, although "over time" was just over a week. Is that all clear to you now?

Star Wars: Tales from the Galaxy's Edge will be featured on "Meta Quest 2" in Downtown Disney at Disneyland, according to this blog post. Even though the Oculus icon is prominently displayed in the artwork, the Meta Quest 2 logo is still prominently displayed. Because of this, we're unable to tell if the logo on the Quest headset actually belongs to Oculus or Meta. While the Oculus Quest 2 is still listed at the top of the page, the Quest 2 is no longer available for purchase.


Meta Quest and ILMxLAB, Lucasfilm's award-winning immersive entertainment studio, are offering a special Quest 2 preview" of the game, as stated in the post's intro. "This type of event is a first-ever for Meta Quest at the Disneyland Resort," it adds later. Toward the end of the year, this transformation is taking place at a rapid pace. Do you like the Meta Quest 2 logo? Let us know in the comments section below!