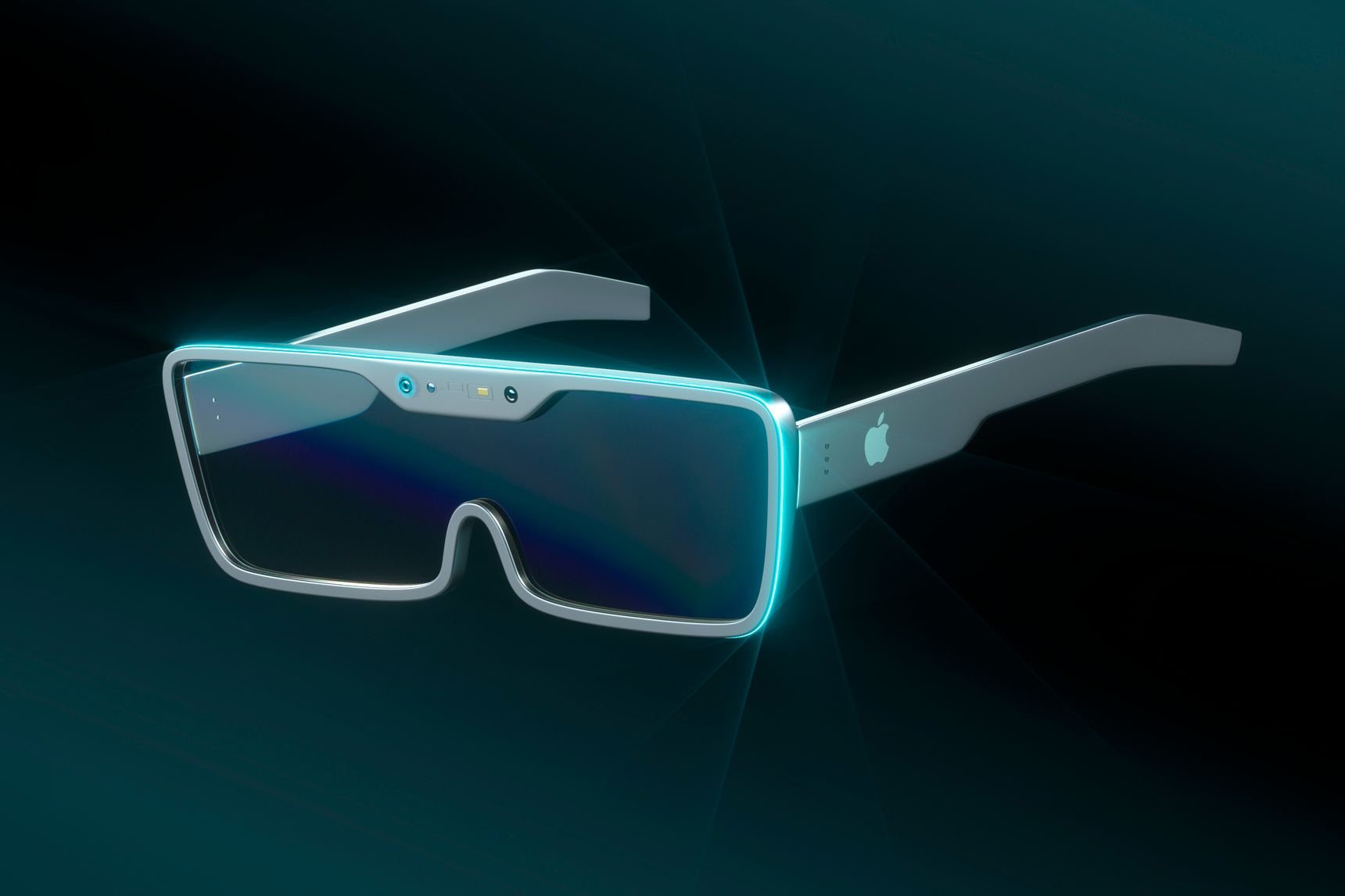 Wait until next year to see how much buzz there is about Facebook, virtual reality, and the metaverse. In 2022, Apple is expected to unveil something at least as exciting: a head-mounted device with the potential to become the next big thing after the iPhone. Meta Platforms, as Facebook's parent company is now known, is focused on creating a world that is different from our current reality, one that we can escape to while sitting on our couches. Apple is raising the stakes by rumored plans for a headset or smart glasses that will provide access to a layer of information, objects, and data that will be spread across our view of the real world like digital pixie dust—a so-called augmented reality, or AR—according to analysts. While Apple hasn't revealed its plans, analysts and other industry insiders believe the company will unveil its first AR device by the end of 2022.

Tim Cook, Apple's CEO, has talked about augmented reality for so long that it's easy to forget how significant it could be for the company and the entire tech industry. Depending on which expert you listen to, augmented reality is either destined to be just another way we access the internet, or it will completely subsume our experience of it and become an essential gateway to the metaverse that so many companies claim to be creating now. In either case, the impact of an AR headset and the market for it could be enormous, and several factors—from Apple's growing prowess in developing microchips to its army of devoted app developers—indicate that the company is uniquely positioned to quickly build a moat around its AR business, much like it did with the iPhone. Of course, a surprising variety of similar face-based computers have been released or will be released soon by other companies.

Though it weighs a hefty 1.25 pounds, starts at $3,500, and is entirely focused on business customers, Microsoft's HoloLens 2 headset is perhaps the most successful AR device to date. At least for the time being, the company is thinking about the customer. Microsoft's headsets will eventually be "more immersive, more affordable, and come in more socially acceptable form factors," according to Alex Kipman, a mixed reality engineer at Microsoft. These headsets are part of a larger phenomenon known as "spatial computing," which has the potential to overtake the smartphone as the next big thing.

Virtual reality-only headsets, such as those sold by Meta's Oculus brand, fully immerse people in virtual dom; augmented reality and "mixed reality" headsets, which add cameras and can pass through to the wearer a view of the outside world; and lightweight "smart glasses," which look and feel more or less like eyeglasses but can project information into a person's view—something like a more-evolved version of the origami. 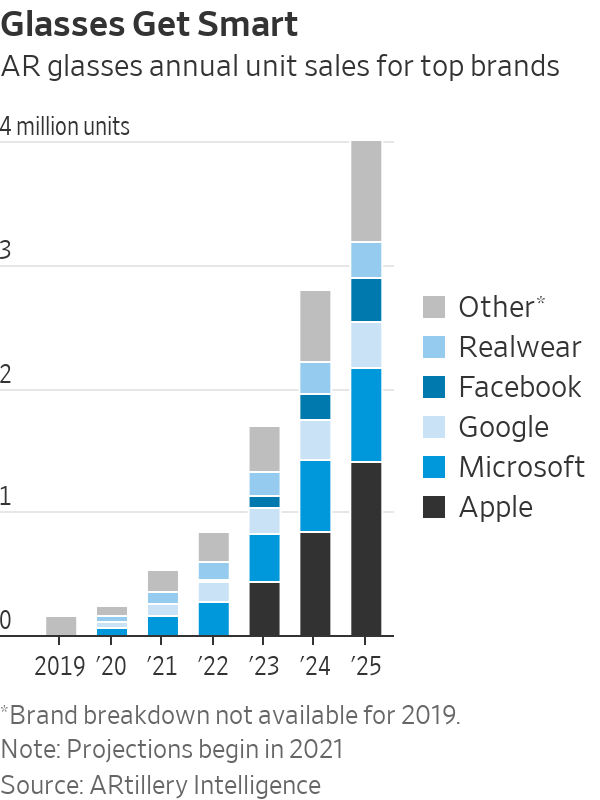 Apple, though, will bring some unique advantages to its alternate-reality play that could quickly vault it ahead of those who were earlier to market.

To begin with, any Apple headset will almost certainly be built around Apple's own homegrown chips, which are now unrivaled in performance for mobile devices by the all-important metric of performance per watt—basically, how much computing power you can get out of a battery charge—according to some benchmarks.

According to Mike Boland, an analyst at ARtillery Intelligence, a research firm specializing in spatial computing, this is a huge advantage in overcoming the physical limitations that have constrained other AR devices like Microsoft's bulky and not-so-stylish HoloLens or a similarly bulky one from a startup called Magic Leap. Furthermore, Apple's existing product ecosystem lends credence to its prediction that augmented reality will be more accessible to more people than virtual reality. AR devices could use transparent lenses to display information like navigation guidance, message alerts, and even video chats in a way that is both useful and creepy.

With its mobile devices and wearables, Apple has established itself as the "computing where you are" company, demonstrating that most people prefer to interact with devices in this manner rather than disappearing into the fully immersive VR technology that Meta has championed.

At this time, the ability to overlay the world with a heads-up display that places driving directions, messages, video chats, and everything else we do on our phones directly into our field of view may not seem all that appealing. Mr. Boland claims that while the market for VR headsets is still small—in the low tens of millions of units sold annually—the market for eyeglasses is $150 billion.

Apple, he adds, is the only company that can pull off reasonably sleek "smart glasses" that achieve enough of the functionality of a HoloLens or a Magic Leap headset. Smaller companies with far fewer resources and market clout than Apple have made progress on similar projects demonstrating the concept.

Vuzix, an AR headset company founded in 1997, recently unveiled the Vuzix Shield, its newest and most stylish smart glasses. The battery, computer, cameras, and display projector must all be crammed into the temples of the glasses, but they are designed to be worn all day and are based on Vuzix's decades of experience creating AR headsets for businesses and the Department of Defense, according to CEO Paul Travers.

Snap, the parent company of Snapchat, added augmented reality capabilities to the latest version of its Spectacles smart glasses earlier this year, which are currently only available to developers. Niantic, the Google spinoff responsible for the popular augmented reality game "Pokémon Go," is also developing a pair of lightweight smart glasses. According to CEO John Hanke, Niantic's first smart glasses will be a "full AR device," capable of creating the illusion that fully three-dimensional objects are present in the world around the user. Full AR in a lightweight, easily worn device is a technical challenge that has so far eluded all competitors, but that won't last forever, according to Hugo Swart, Qualcomm's vice president of XR and the metaverse.

(Augmented, mixed, and virtual reality are all referred to as "XR" in the industry.) He adds that in ten years, we will be close to the "holy grail" of augmented-reality glasses that are both light enough for long-term use and as capable as today's bulky AR and VR headsets.

Mr. Swart has a unique perspective on the industry as the head of Qualcomm's microchip division, which powers devices like Meta's latest Meta Quest 2 headset, Vuzix's Shield glasses, Microsoft's HoloLens 2, and Niantic's upcoming device, among others. Mr. Swart believes that one solution for AR is to have a lot of the required computing take place on a device that everyone already owns—their smartphone—and connect to the headset using the new Wi-Fi 6e standard. This could allow for a fast, high-bandwidth connection between the two, allowing the phone to handle the majority of the processing.

Niantic and other companies are working on such solutions, according to Mr. Hanke, in order to bring full AR to a glasses-like form factor. He continues, "Doing this means a fair amount of mass and heat dissipation that no longer has to go on your head." Given the popularity of the iPhone, this approach would also play to Apple's strengths. And, if Apple chooses to offload much of the necessary processing to the iPhone in order to keep its smart glasses slim, it may cement the iPhone's position as the dominant mobile device in many markets, according to Mr.

The analyst, Boland. Apple's strategy has been to sell more and more accessories, such as watches and headphones, as smartphone demand slows, and adding smart glasses to that growing list just makes sense, he says. It's a design and cultural challenge to see if people will actually adopt smart glasses, regardless of their form factor. "Frankly, people despise stuff on their faces," says Vuzix's Mr. Travers. Asking people to wear a computer on their face is a far cry from asking them to carry a smooth, thin slab of glass and metal that can disappear into a purse or pocket, as the world saw with the backlash against the original Google Glass and the mixed feelings reviewers have expressed about more recent efforts, like Meta's collaboration with Ray Ban to put cameras into sunglasses.

Another of Apple's advantages, its ability to market its devices—and for those devices to market themselves—might play a role here. The company is a master at designing hardware that instills FOMO, or "fear of missing out." It also has a large army of programmers who create the software and services that make that feeling possible. If Meta succeeds in creating a software-based metaverse, but Apple's headsets become the best and most popular way to access it, it wouldn't be the first time that users used Apple's devices to access Facebook, WhatsApp, and Instagram, all of which are hugely popular on the iPhone.

Gaming, according to some AR proponents, could be the FOMO-inducing killer app for spatial computing. However, unlike the smartphone, where the killer app turned out to be a collection of apps made possible by mobile internet access, smart glasses may not have a single driver of adoption. "I believe it will be about making all of the things you do on your phone today easier, less intrusive, and more natural to access by presenting them contextually as you move through the world," Mr. Smith predicts.

Hanke. There are still a lot of questions about AR. It's possible that Apple's headset sales will never be as large as its watch business—a sizable business by any objective standard, but a small portion of the total revenue of the world's most valuable company on a regular basis. But it's also possible that augmented reality, as well as the broader phenomenon of spatial computing, is the natural successor to the PC and smartphone, as some believe. In which case, the battle over who will provide which parts of that future is just getting started between Facebook, Apple, Google, and hundreds of other companies.