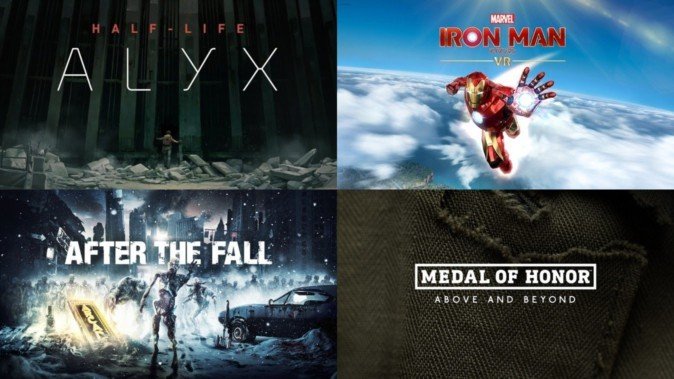 Happy New Year everyone, this is Dr. VR \ AR Amit Caesar, wow already 2020, who would have believed? VR is amazing, 2019 has been good for virtual reality 2020 will be crazy, even because of the abundance of new games, 2020 brings with it a host of huge budget titles, the new games should put us in more time in our virtual reality glasses.

Right now it's raining outside and maybe that's it at all, so I sat down and translated and wrote you a great game article, for all the outside VR platforms, Steam VR Rift, Vive, Windows MR, Valve Index Oculus Quest and PSVR, etc.

An update I received from ROAD TO VR: PlayStation 5 is due for the 2020 holiday season, PlayStation 5 comes with a host of new games for PSVR, including the first model to work. (PS VR is not VR spot) Sony has not yet announced the second iteration of PSVR, so we hope to learn more about the PSVR platform games soon.

It's a story about an impossible fight against a cruel alien race known as the Combine, the match happens between the events of Half-Life and Half-Life 2. Playing as Elix and you are the only chance for humanity to survive.

Game Name: After the Fall

Explore the land remnants of civilizations in the alternate 1980s, create tools and weapons, and use super-destructive forces with real-life movements.

Use weapons and military equipment to evade and neutralize enemy threat. Get in touch with the destinations, filter out without paying attention to the shadows:  hidden phantom in a stealth adventure.

Studio Description: Sent to hostile wet areas in your tactical kayak, use weapons and military equipment to dodge and counter enemy threat. Contact your deadly targets or sneak in without notice from the shadows: This is your task to follow. Phantom: they redefine an undercover character as a stealth act.

Studio Description: Jack and Liv again in Lone Echo II. Returning to Saturn's Rings in the much-anticipated sequel Let's solve the Lone Echo mysteries and travel deeper into space - beyond the limits of time itself.

Name of the game: Medal of Honor

"Medal of Honor": Medal of Honor Above and beyond is a wonderfully action-packed and amazing VR experience that takes place in World War II, where you enter the boots of the Strategic Services Office (OSS) in war-torn Europe. A great single-player campaign that takes you through historical, land, air and sea events, sabotage Nazi bases, eliminate enemy plans, help the French underground, and much, much more.

Are you a sheriff? A retro-futuristic slum in cyber-punk, where the unit's residents are the "low". Humans are too poor to enter a platform or old robots that have not achieved intelligence. What you do with your time depends on you. Are you good cops or punk criminals?

Studio Description: Vertigo 2 is a single-player VR adventure. Explore the depths of the vast quantum reactor as it descends to the end of your journey home.

Studio Description: The Stealth Experience of Battle zone Manufacturers and Sniper Elite 4, with Just Add Water, Come Fight for Italian Resistance in a Bold Mission to Get Rid of World War II Sicily from Nazi Danger.

Studio Description: The office is a fantastic journey, lush through diverse fields and deep and exciting guidance on the mentor's emotional chronicle.

The Walking Dead Game, your decisions are important. Every challenge you face and a decision you make changes the plot. Here, I let you decide what the plot is.

A battle royale game from the studio behind the indie VR hit and smash box Arena 2016 hit. In VR.

ARTICLE BY AMIT CAESAR FOR VISRAEL 2013