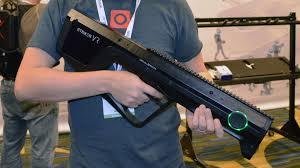 Stripper vr, it's an automatic weapon for virtual space, not only do you feel like holding a real rifle in your hands, the weight and feeling you feel real, the Stripper vr also has a vibration like a real weapon.

Striker vr, is actually the first virtual-reality weapon that actually works in a precise and realistic way, the key to Edon Guraziu 's technology is to ensure a whole arsenal of realistic weapons that will give us a real sense of war in virtual reality.

The shotgun, which can be disassembled and assembled, has all the qualities of a real weapon, and the criticisms it received from the experienced warriors who tried the weapon made us feel that it was very confusing during the demo stages, and that it was almost a real weapon.

In addition, striker vr works with all types of virtual reality technologies, including surveillance components and room scanning technologies, such as technology available on HTC VIVE, Oculus Rift, Holulans 2, quest, windows and more.

In addition , the system will also support location detection technologies such as: Valve's Lighthouse, Oculus, PlayStation's Move, htc vive and, of course, all new models where the technology is already integrated into the glasses.

As of 23/05/2020, there was a large stock in Israel, in honor of the launch of the new rifle, for sale now at surprising prices.

Written by Larry Singul of Israel 2013.

The product can also be purchased from our stores in Israel.

Strike vr vr gun virtualreality gun oculus quest gun vr rifle Striker vr
Defending against corona, buying online masks and protective equipment, what are the differences between the masks? What is the difference between N95 and KN95?
We are all in a panic from the corona virus, way ?, not for any reason. The corona virus threatens humanity, especially considering that it will take a year or more To find a vaccine.
virtualreality World War III part 1, Article by Larry Singol