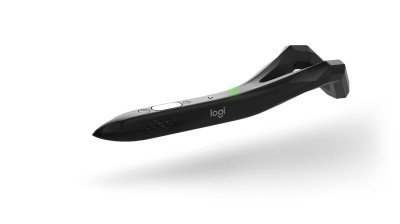 Logitech has announced its new development, a pen called Logitech VR Inkjet Edition. Unlike existing VR controllers, in this case you actually hold a Logitech VR pen and use it like traditional use, the pen has the ability to seamlessly switch between drawing in the air and drawing on a flat surface.

Logitech is in the final stages of development, in a video teaser that the company has uploaded to the network, showing the pen being used in graphics software such as 3D CAD Car and Aircraft Design, the company also says it is looking for industry partners and application developers to open applications. Either way, Logitech probably targets its product, directly to professional designers and not to the amateur field right now.

Intel's new pen has a pressure-sensitive edge on drawing and surfaces, and the VR Edition also has additional buttons, grip controls, and a 2D touchstrip .. The battery life of two to three hours depends on usage. Right now, the pen is compatible with all Steam VR tracking solutions, which means it can be used with Vive, Vive Pro and Valve Index, but there is no word to support the Oculus virtual reality glasses.

VR. Logitech plans to release a limited number of VR Ink Pilot Edition devices to "select partners" later this year, but no word on pricing or when we can expect the pen to be widely available.