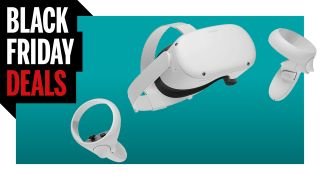 Now that Amazon, eBuy, have all launched early sales, those bundle offers could come sooner than you think. We've seen plenty of retailers offering early discounts that rival last year's official Black Friday prices, so if you're looking to get ahead of the crowd we'd recommend keeping a close eye out.

This year we're expecting Black Friday Oculus Quest 2 deals to hit bundles the hardest. We can't see a significant price drop on the horizon, considering this headset hasn't seen a dollar off its MSRP in its lifetime. However, if there are any blockbuster $20 savings you'll need to get in there quickly as these headsets sell out at the best of times. If you're after a more reliable path to savings, though, you'll be better off picking up a few accessories with your headset. As it stands today, the Starter bundle offers up a headset with a carrying case for $348, the Streamer bundle includes a cable for use with your PC for $378, and the Pro bundle packages a carrying case and Elite Strap in with the headset for $397. Of course, these are just the official bundles. We've seen retailers like Best Buy and Walmart in particular offering extra controllers, comfort grips, carrying cases, headphones, and wrist straps for a discounted rate and this is where we'll likely see the biggest savings. Black Friday Oculus Quest 2 deals will favor those who want to get all the extras from day one, then, with the highest value bundles sitting in the region of $399 - $499. Of course, it's also likely that we'll see individual savings on these accessories by themselves. So, if you've already managed to snag yourself a headset, or you're happy to pay full price on Black Friday itself, you may also find savings on the Elite Strap, replacement controllers, or headsets specifically designed for the system - like the Logitech G333.

Do you need a PC for Meta Quest 2

One of the biggest draws of the Oculus Quest 2 system is that you don't need a PC to run it. That means you just need to pay that $299 / £299 initial cost and you're good to go, no expensive gaming PC needed. Of course, streamers and those looking to beef up their experience, can option to tether to their rigs, but rest assured you won't need to fork out for the latest components to run this VR headset.

Should you buy an Meta Quest 2 before Black Friday?

If you're raring to get your nogin into a virtual reality world, it may be tempting to bag yourself a headset before Black Friday Oculus Quest 2 deals officially land. We're not expecting to see many discounts on the headset itself (though flash sales on the day could still prove us wrong) which means there isn't too much danger of being sniped on price here. However, this is still a popular item and, entering its second year on the shelves, retailers will be keen to show it off. That means you might miss out on bundle deals including official accessories or credit to buy apps and games by taking an early leap.