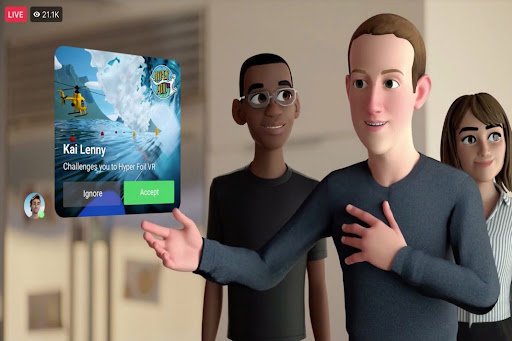 In the opening keynote of Connect 2021, Mark Zuckerberg fenced with the hologram of an Olympic champion, attended a work meeting with humans and a giant red robot and played a surfing game with a face full of sunscreen. He admitted that it's still very early days for the metaverse but said he and his company are focused on the future.

He said that his organization is still the company that builds tech around bringing people together, but from now on the focus will be metaverse first, not Facebook first.

"We will invest many billions for years to come before the metaverse reaches scale," he said.

He admitted that it's difficult to experience this next iteration because it doesn't exist yet. However, he said he has a sense of how it will come together and what it will feel like.

"A lot of this will be mainstream in the next five to 10 years," he said.

Zuckerberg said teleporting would be another vital part of the metaverse that provides the ability to move from one virtual room to another to a game to other worlds.

"Teleporting around the metaverse will be like clicking on a link, it will be a common standard," he said. "We're already building an API to support this kind of interoperability."

hardware and software advances for the company's AR and VR work.

"This is the future I want and I'm going to push to make it happen," he said.

He framed critics of the metaverse as people who never want to focus on the future, while he is thinking about how to build new games, exercise routines, ways to learn and commerce opportunities.

"I will do my best to celebrate this spirit and absolutely go for it," he said.

Zuckerberg made no mention of the latest scrutiny from lawmakers but he did claim that things will be different with the metaverse and that he has internalized a few lessons from the last few years.

"We have years before the metaverse is fully realized, so we have time to make sure that interoperability, open standards, privacy and safety can be built in," he said.

He didn't offer any specifics other than to say that privacy and safety need to be built into the metaverse from day one.

Prioritizing creators and paying them

He emphasized multiple times that the metaverse will be built by hundreds of thousands of creators and that interoperability will be a vital component of this next iteration of the internet.

"We are talking about entirely new categories of experience that don't really fit into how we understand computers today," he said. "This will be an embodied internet where you are in the experience and not just looking at it."

He said avatars will be 3D image that can deliver presence in a new way.

"Maybe you'll have a photorealistic avatar for work, a stylized one for hanging out and a fantasy one for gaming," he said.

Another missing component of the metaverse is an ecosystem that "allows people to be rewarded for their work," Zuckerberg said.

"Creators and developers should be able to make a good living doing this work," he said.

Zuckerberg also said that app creators won't have to use the Quest store because that approach "stifles innovation and holds back the entire internet economy."

Meta is also planning a professional certification process and a SparkAR curriculum.

Horizon is the company's current VR platform for creating content and interacting in the metaverse and has three flavors: Home, Worlds and Workrooms.

Zuckerberg said the company will soon be introducing a social version of Home that will allow other users to join via avatar. Meta is planning to allow messenger calls to be picked up in VR so that users can explore a new world or join a game.

The company is also working on another significant change to the platform: the ability to use a Quest headset without connecting it to a Facebook account.

"We understand that not everyone wants their social media profile linked to all of these other services," he said.

Meta also announced a new Interaction SDK and a new Voice SDK for the Spark platform. The former will make it easier to add hand interactions into apps and the later will allow voice integration.

Meta will release a new set of controllers designed particularly for exercise and a new headset that allows wearers to wipe the sweat from their brow during a VR workout.

In the first 40 minutes of the opening keynote, Zuckerberg made a reference to the picture of him wearing a mask of sunscreen, but said nothing about the Facebook Papers and what these documents revealed. Facebook has been in the press for all the wrong reasons lately. Former Facebook employee Frances Haugen shared thousands of internal documents to lawmakers and media outlets to illustrate how the company is managed. The company has described Haugen's accusations as misleading and said it is continually improving its content moderation abilities.

As The Washington Post reports, "a trove of internal Faceook documents reveals that the social media giant has privately and meticulously tracked real-world harms exacerbated by its platforms, ignored warnings from its employees … and exposed vulnerable communities around the world to a cocktail of dangerous content."