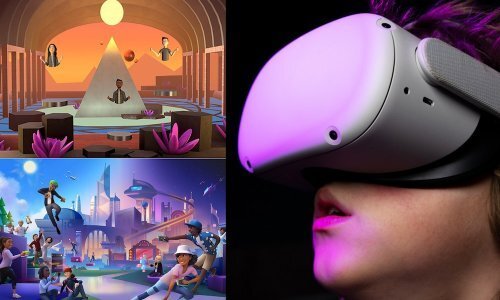 Unity Labs released an incredible proof-of-concept mixed reality demo earlier this year, demonstrating the power of merging the real and virtual worlds. The project's creators have announced that the experiment will be available on Quest sometime next year.

Unity Labs debuted Unity Slices: Table, a proof-of-concept social mixed reality app that seamlessly connects people—both local and remote—into a shared experience centered around a game board, at Facebook Connect at the end of October.

It's difficult to explain, so here's a video example:

Take a look at the video above for more information. We can see two other users around the table, and then the view seamlessly transitions between the real-world passthrough view and the virtual world. Is there anything else that piques your interest?

One of the two users we see is present, while the other is not. The local player's real body becomes visible as the virtual view is wiped away in favor of the real-world view, but the virtual player's body remains as an avatar (because they aren't actually in the real room).

One goal of Unity Slices: Table, according to Eric Provencher, one of the project's developers, is to break down the barrier between local and remote users by making both types of players feel equally present in the experience.

This is why the experience is centered on a virtual chess board, which serves as a common ground for everyone in the scene, whether they are in the same room or on opposite sides of the globe. The chess board not only brings people together around a common point in space, but it also rests on a real surface, transforming it into a virtual touchscreen with real haptics (thanks to the real surface underneath). Everyone (local or remote) 'touches' the same board at the same time in the same spatial frame of reference, making it feel like a shared piece of reality as well.

"It took us a while to get to a system that worked smoothly," Provencher wrote. "But the moment we first hopped into a networked session with expressive avatars, and could both see and hear the other person tapping our table over the voice chat as if we were in the same room, was truly mind-blowing." "Bringing this tangible part of our reality into a shared experience felt almost magical."

Unity Slices: Table will be released as a demo on Oculus Quest for anyone to try this week, according to Provencher.

"My team is still putting the finishing touches on Unity Slices: Table is now available for download; look for it on App Lab in 2022!"

It'll hopefully be a fully functional multiplayer chess app in addition to being a fantastic mixed reality demo. Next year, we're looking forward to mixing reality ourselves.