A NEW BRAIN-COMPUTER INTERFACE WITH A FLEXIBLE BACKING 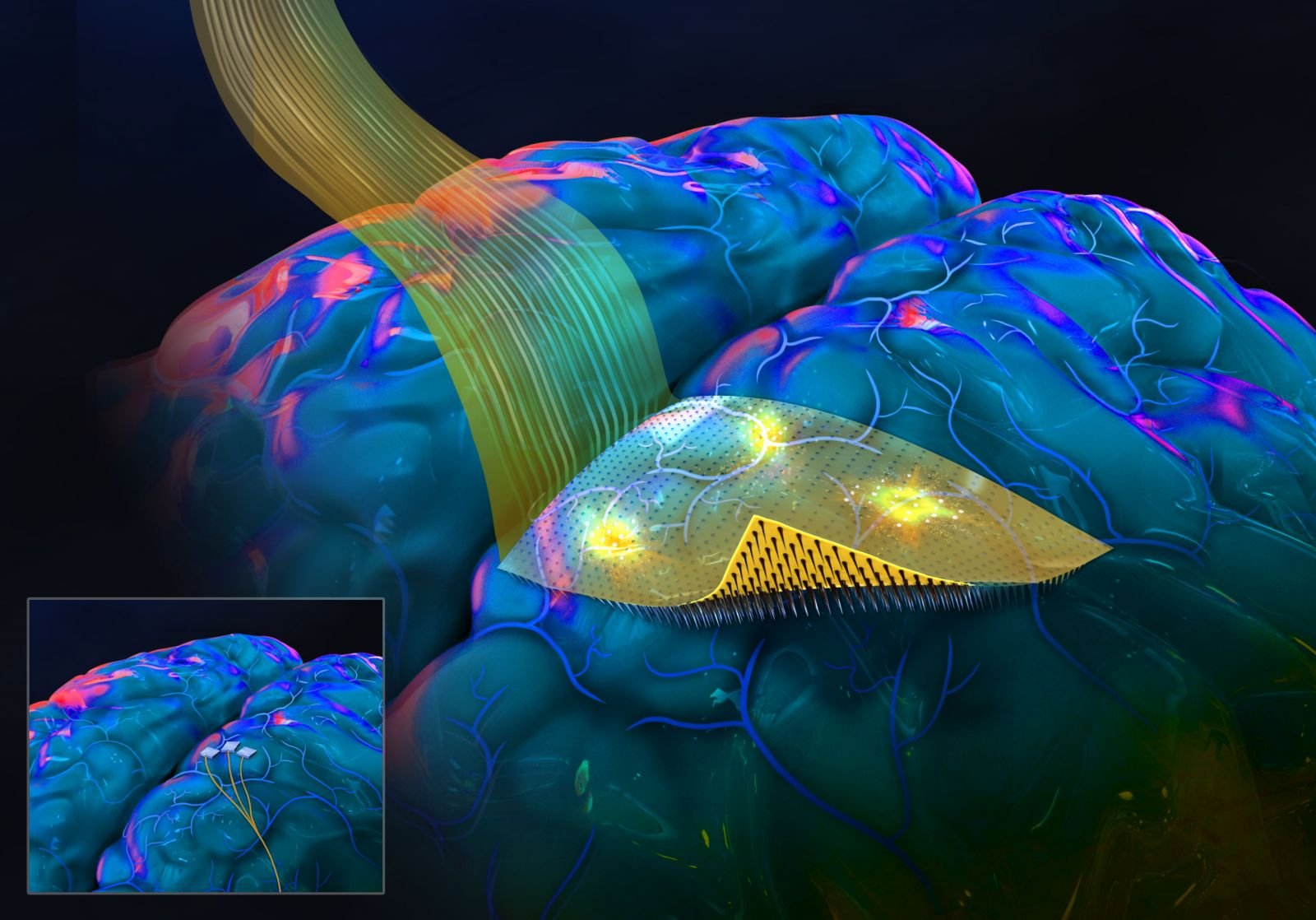 March 14, 2022: Engineering researchers have invented an advanced brain-computer interface with a flexible and moldable backing and penetrating microneedles. Adding a flexible backing to this kind of brain-computer interface allows the device to more evenly conform to the brain’s complex curved surface and to more uniformly distribute the microneedles that pierce the cortex. The microneedles, which are 10 times thinner than the human hair, protrude from the flexible backing, penetrate the surface of the brain tissue without piercing surface venules, and record signals from nearby nerve cells evenly across a wide area of the cortex.   This novel brain-computer interface has thus far been tested in rodents. The details were published online on February 25 in the journal Advanced Functional Materials. This work is led by a team in the lab of electrical engineering professor Shadi Dayeh at the University of California San Diego, together with researchers at Boston University led by biomedical engineering professor Anna Devor.

This new brain-computer interface is on par with and outperforms the “Utah Array,” which is the existing gold standard for brain-computer interfaces with penetrating microneedles. The Utah Array has been demonstrated to help stroke victims and people with spinal cord injury. People with implanted Utah Arrays are able to use their thoughts to control robotic limbs and other devices in order to restore some everyday activities such as moving objects.The backing of the new brain-computer interface is flexible, conformable, and reconfigurable, while the Utah Array has a hard and inflexible backing. The flexibility and conformability of the backing of the novel microneedle-array favors closer contact between the brain and the electrodes, which allows for better and more uniform recording of the brain-activity signals. Working with rodents as model species, the researchers have demonstrated stable broadband recordings producing robust signals for the duration of the implant which lasted 196 days. In addition, the way the soft-backed brain-computer interfaces are manufactured allows for larger sensing surfaces, which means that a significantly larger area of the brain surface can be monitored simultaneously. In the Advanced Functional Materials paper, the researchers demonstrate that a penetrating microneedle array with 1,024 microneedles successfully recorded signals triggered by precise stimuli from the brains of rats. This represents ten times more microneedles and ten times the area of brain coverage, compared to current technologies.

These soft-backed brain-computer interfaces are thinner and lighter than the traditional, glass backings of these kinds of brain-computer interfaces. The researchers note in their Advanced Functional Materials paper that light, flexible backings may reduce irritation of the brain tissue that contacts the arrays of sensors. The flexible backings are also transparent. In the new paper, the researchers demonstrate that this transparency can be leveraged to perform fundamental neuroscience research involving animal models that would not be possible otherwise. The team, for example, demonstrated simultaneous electrical recording from arrays of penetrating micro-needles as well as optogenetic photostimulation.

The flexibility, larger microneedle array footprints, reconfigurability and transparency of the backings of the new brain sensors are all thanks to the double-sided lithography approach the researchers used. Conceptually, starting from a rigid silicon wafer, the team's manufacturing process allows them to build microscopic circuits and devices on both sides of the rigid silicon wafer. On one side, a flexible, transparent film is added on top of the silicon wafer. Within this film, a bilayer of titanium and gold traces is embedded so that the traces line up with where the needles will be manufactured on the other side of the silicon wafer. Working from the other side, after the flexible film has been added, all the silicon is etched away, except for free-standing, thin, pointed columns of silicon. These pointed columns of silicon are, in fact, the microneedles, and their bases align with the titanium-gold traces within the flexible layer that remains after the silicon has been etched away. These titanium-gold traces are patterned via standard and scalable microfabrication techniques, allowing scalable production with minimal manual labor. The manufacturing process offers the possibility of flexible array design and scalability to tens of thousands of microneedles.

Toward closed-loop systems
Looking to the future, penetrating microneedle arrays with large spatial coverage will be needed to improve brain-machine interfaces to the point that they can be used in "closed-loop systems” that can help individuals with severely limited mobility. For example, this kind of closed-loop system might offer a person using a robotic hand real-time tactical feedback on the objects the robotic hand is grasping. Tactile sensors on the robotic hand would sense the hardness, texture, and weight of an object. This information recorded by the sensors would be translated into electrical stimulation patterns which travel through wires outside the body to the brain-computer interface with penetrating microneedles. These electrical signals would provide information directly to the person's brain about the hardness, texture, and weight of the object. In turn, the person would adjust their grasp strength based on sensed information directly from the robotic arm.

This is just one example of the kind of closed-loop system that could be possible once penetrating microneedle arrays can be made larger to conform to the brain and coordinate activity across the "command" and "feedback" centers of the brain.

Previously, the Dayeh laboratory invented and demonstrated the kinds of tactile sensors that would be needed for this kind of application, as highlighted in this video.

The advanced dual-side lithographic microfabrication processes described in this paper are patented (US 10856764). Dayeh co-founded Precision Neurotek Inc. to translate technologies innovated in his laboratory to advance state of the art in clinical practice and to advance the fields of neuroscience and neurophysiology.

D. R. Cleary has a primary appointment in the Department of Neurological Surgery at UC San Diego Health.

M. Thunemann, K. KÄ±lÄ±ç, and A. Devor are affiliated with the Biomedical Engineering Department at Boston University.