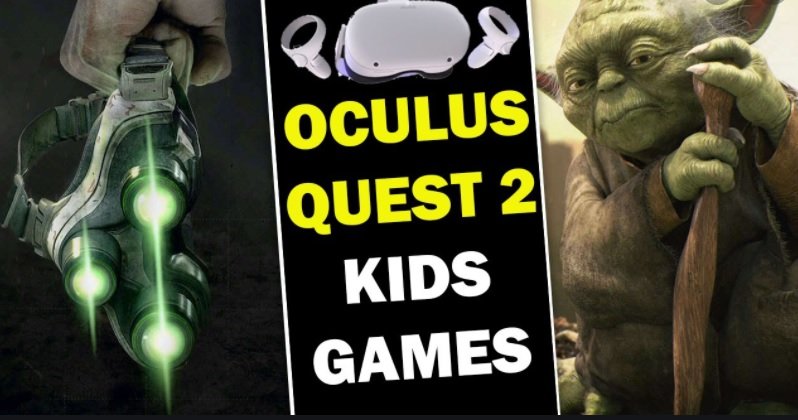 The best VR games to play with the entire family.

Virtual Reality (VR) can take you anywhere. One minute, you’re in Machu Picchu on a photo assignment for National Geographic; the next, the Oculus Quest has you staring directly into Darth Vader’s mask. Or dancing. Or driving. Or whatever.

We’re going to break down our favorite Oculus Quest experiences in this living Top 10 list.

Before we get into the list, though, let’s tackle a couple of quick points. Namely, why focus on the Oculus Quest for the best VR gaming/app options? We go into it in a lot more detail in this Super Parent VR Guide, but the turbo version is this:

Ease of use / Portability: The self-contained system is as easy to set up as it is easy to find a place to play. Thanks to cameras on the head-mounted display, you can dive in just about anywhere.

It supports gaming PCs: A more recent development for the Oculus Quest is that with the right cable (See: Oculus Link - or suitable replacements on Amazon), you can connect the Oculus Quest for a gaming PC and play high-end VR experiences like Half-Life: Alyx.

*The Price: Normally, we’d say that this is a great, practical, affordable solution for mid-level, full-featured VR. Only problem: The supply chain. While the Quest retails for $400, it’s currently hard to locate a new one on store shelves. We’ll, of course, update this as supply ramps back up.

The “Is my kid ready for VR?” Disclaimer

We started tackling this very question in another story about the state of VR — which you’re more than welcome to read right here. The short version: The company line from Oculus is that it doesn't recommend children under the age of 13 using the headsets. Some researchers have said that being under 13 years old is OK to play. Others have said that children are still developing the cognitive abilities to process virtual reality well into their teens.

With all that out of the way, let’s jump into our current list of favorites...

...and keep checking back with Super Parent, as we’ll regularly update this list with new games your kids may want to try. If you want to see any of the older games, we've featured — which are equally recommended — head over to Page 2.

Beat Saber
Rated E for Everyone

It’s jokingly referred to as “Jedi Hero,” but this light saber music game is without a doubt fun for the entire family — provided everyone in the house is ready for VR. Strap on a headset and you’re in a virtual arena. As the music plays, targets and obstacles come your way, so be ready to slash and dodge your way to the beat. With a saber. Get it?

Tetris Effect
Rated E for Everyone

Tetris has driving beats, special effects, and a lot of insane VR immersion. This is definitely NOT the quarter-munching classic you remember — it's a LOT more. Collaborating with the team behind the legendary musical puzzler Lumines, Tetris Effect is a can't miss VR experience. There's even whole new mechanics that switch up how you play. When you enter "The Zone" you can momentarily freeze time and simple lines to keep away from Game Over for just a little longer.

Wonderland is the perfect setting for a VR adventure. But this tale doesn’t include Alice: think of Down the Rabbit Hole as a unique prequel to the book you’ve known so well since childhood. In living storybook fashion, this adventure progresses as you make your way further and further down an actual rabbit hole. Puzzles will take you through both sides of the looking glass, and there’s no denying that this is a great showcase game for VR. It also is a perfect playdate for your entire family.

The Room VR: A Dark Matter
Rated E for Everyone

Escape rooms are a real life iteration of classic puzzle-solving adventure games. The Room franchise perfected that feeling, and now, it’s fully realized within VR. While there’s something oddly meta about trying to escape from virtual rooms, it done perfectly here. Deep inside the British Institute of Archeology, you must untangle a series of mysteries to find your missing comrade. It’s smartly designed as a VR experience from the ground up and a great way to bring in people that used to love games like The 7th Guest or Myst back in the day.

Acorn: Attack of the Squirrels!
Rated E10+ for Everyone 10+

Acron is a comic take on "capture the flag." But instead of a flag, you’re trying to hoard giant acorns. As a tree. Strap on the VR headset and you’re rooted to the ground, flinging globs of goop and various floral ammo to keep the waves of squirrels at bay. Now, here’s the twist. Your family and friends download the app on their smart devices and take on the roles of Squirrels (one is tank-like, one’s an engineer that builds ramps, another digs burrows, another bank on its speed). The squirrels must work together to grab those nuts. What it lacks in its variety of modes, it more than makes up for in multiplayer fun. It's definitely worth checking this one out.

Path of the Warrior
Rated T for Teen,

To anyone that grew up playing the likes of Double Dragon, we have the VR game for you. Path of the Warrior is extremely tongue-in-cheek, summoning the feeling of playing an arcade game from the 1980s. Sorry, correction, playing INSIDE an arcade game from the 1980s. After you pick your avatar, you’re in the thick of it, dodging blows, throwing punches, and disarming bombs. It’s dumb, simple fun. Just like those old quarter-munching classics. Since its launch, I have updated the game with 2-player online co-op play. So, at least you won’t be alone on your mission to save Rage City, one punch at a time.

Waltz of the Wizard: Extended Edition
Rated T for Teen,

Merlin. Harry Potter. You. Waltz of the Wizard: Extended Edition is more of a VR sampler experience than anything else. It’s about putting you inside a wizard’s tower and making you feel like magic is real. Well, virtually real, at least. Cast spells, mix potions, play catch with animated statues. As you level up from being some sorcerer’s apprentice, you unlock new abilities, mini-games, and fantastical locales to explore. This is one of those games that you used to introduce people to VR... then come back to play again and again.

Ghost Giant
Rated E for Everyone

There are a few games you play and just think that they are a delight. Ghost Giant is one of those games. Something fun, touching, innocent, and almost childlike in presentation. It also is a VR masterpiece. On one level, it serves as a beautiful puzzle game that has you prodding the environment for clues and hidden prizes.

But it also tackles real human emotion along the way. And it’s all done with the endearing direct connection between you (in VR as the Ghost Giant) and the little boy you are helping. It’s not just a great game - or a great VR game - it’s a wonderful tale that we can’t recommend enough.

All the fun of high-speed sci-fi racing without maximum g-forces physically slamming you into your seat. If you were to take a future classic racing game like Wipeout or F-Zero and translate it into a virtual gravity-bending sprint, this is the game you'd get. Jump into the cockpit of a variety of space-racers and navigate VR race courses of the future that have you going through a campaign, battling a giant machines boss - and more - all to a sweet electronic soundtrack. All you single-player racing game fans out there: Check this one out. Oh, and one fair word of warning: Don’t be afraid to eject (remove your headset) if you felt a little off. High-speed motion in VR can trigger some weird feelings, and the speed here can be intense if you’re not ready for it.

A techno-yoga puzzle game in VR with weapons. That is probably the quickest, most reductive way to describe what Super hot VR is all about. Every level puts you in a tricky situation that requires you to carefully plan out your every movement. The enemies - and incoming fire - only move when you do. So you have to figure out the best ways to dodge and beat back the enemies. For those worried about bloodshed, don’t sweat it. You’re only up against mannequin-like models, holding weaponry. If you’re OK with that, your teenagers should get a kick out of it.