Way Artificial Intelligence in the Metaverse is the new reality ?

Artificial intelligence (AI) applications are far more prevalent than you might think. According to a recent McKinsey survey, 50% of respondents said that AI is used in at least one business function at their company. According to a Deloitte report, 40% of businesses have implemented an AI strategy across the board. AI now plays a major role in consumer-facing applications as well, through facial recognition, natural language processing, (NLP) is the ability of a computer program to understand human language faster computing, and a variety of other behind-the-scenes processes.

It was only a matter of time before AI was used to creating smarter, immersive worlds in augmented and virtual reality. AI can parse massive amounts of data at breakneck speed in order to generate insights and drive action. Users can either use AI for decision-making (as most enterprise applications do) or combine AI with automation for low-touch processes. To create scalable and accurate virtual worlds, the metaverse will combine augmented and virtual reality (AR/VR) with artificial intelligence and blockchain.

What Is the Metaverse, and Why Does It Require Artificial Intelligence? 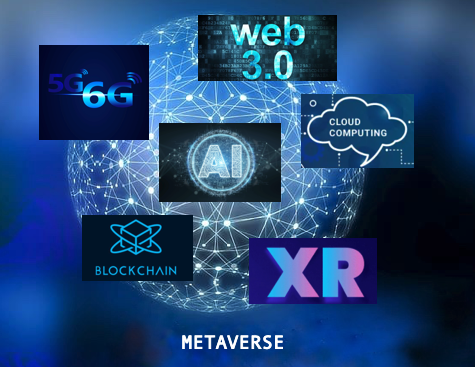 Use Cases for AI in the Metaverse

While VR worlds can technically exist without artificial intelligence, the combination of the two unlocks a whole new verisimilitude. This could affect the following use cases:

What Is the Metaverse, and Why Does It Require Artificial Intelligence?

The metaverse is a vast virtual space in which users can interact with 3D digital objects and 3D virtual avatars of themselves complexly that resemble the real world. In the early 1990s, science fiction writer Neal Stephenson proposed the concept of the metaverse, which was later developed in part by companies such as Second Life, Decentraland, Microsoft, and, most recently, Meta (formerly Facebook). Facebook is now well-known for its artificial intelligence research and sophisticated AI algorithms. Content analysis, self-supervised speech processing, robotic interactions, computer vision, whole-body pose estimation, and other areas of AI research are all part of the company's AI research. All of this could help to shape Meta's future direction and lay the groundwork for its own version of the metaverse.

Users are at the heart of the metaverse, and the accuracy of your avatar will determine the quality of your and other participants' experiences. An artificial intelligence engine can analyze 2D user images or 3D scans to create a highly realistic simulated rendition. To make the avatar more dynamic, it can plot a variety of facial expressions, emotions, hairstyles, features caused by aging, and so on. AI is already being used by companies like Ready Player Me to help create avatars for the metaverse, and Meta is developing its own version of the technology.

Humans in the digital age,

In the metaverse, digital humans are 3D versions of chatbots. They aren't exact replicas of other people; rather, they are AI-enabled non-player characters (NPCs) in a video game who react and respond to your actions in a virtual reality world. Digital humans are created entirely with AI technology and are vital to the metaverse's landscape. There are many applications, ranging from NPCs in games to automated assistants in virtual workplaces, and companies such as Unreal Engine and Soul Machines have already invested in this direction.

One of the primary ways digital humans use AI is for language processing. Artificial intelligence can help break down natural languages like English, convert it into a machine-readable format, perform analysis, arrive at a response, convert the results back into English and send it to the user. This entire process takes a fraction of a second – just like an actual conversation. The best part is that the results could be converted into any language, depending on the AI’s training, so that users from around the world can access the metaverse.

Expansion of the virtual world at large scale

This is where artificial intelligence truly shines. When given historical data, an AI engine learns from previous results and attempts to generate its own. With new input, human feedback, and machine learning reinforcement, AI's output will improve. Eventually, AI will perform the task and produce results that are nearly as good as humans. AI is being trained by companies like NVIDIA to create entire virtual worlds. This breakthrough will be critical in ensuring the metaverse's scalability, as new worlds can be added with no human intervention.

Finally, AI can also assist in human-computer interactions (HCI). When you put on a sophisticated, AI-enabled VR headset, its sensors will read and predict your electrical and muscular patterns to know exactly how you’d want to move inside the metaverse. AI can help recreate an authentic sense of touch in VR. It can also aid in voice-enabled navigation, so you can interact with virtual objects without having to use hand controllers.

It's important to remember that the metaverse is a relatively new area of study and operation, and AI implementation may encounter difficulties. For instance, there could be inquiries about:

It will be difficult to create an engaging, authentic, and scalable metaverse experience without AI. That's why companies like Meta are collaborating with think tanks and ethics organizations to mitigate the risks of AI without limiting its potential.